From R.A.F. Yatesbury Walter Layne was assigned to No. 15 Personnel Transit Centre at R.A.F. Ternhill.  Here he waited for 10 days doing a lot of early morning PT, followed by lectures on unmentionable medical problems, and how to avoid capture in the case of being shot down.  All time fillers before the commencement of the next Air Gunners course at R.A.F. Penrhos.

On Christmas Eve 1940 Walter Henry Layne (Wally) traveled from R.A.F. Ternhill to Crewe by bus and then by train to Caernarvon, Afonwen and finally arriving in Pwllheli.

Catching a local bus that traveled the only road to the aerodrome he and his kit were dropped off at the gates of R.A.F. Penrhos.

Reporting to the Orderly Room he found the base under a high state of security due to Luftwaffe attacks in July and October of 1940.  These attacks had caused serious damage and some fatalities.  Fortunately for the airmen stationed there, Penrhos suffered no further attacks throughout the war.

Located on the coast of Wales R.A.F. Penrhos had a circular grass airfield with no designated runways, this provided the aircraft with an approximate take off and landing run of 2,500 feet.  There was just one hanger for servicing aircraft and a collection of wooden huts that served as accommodation and classrooms for the students.

Bordering the airfield to the southwest was a line of hills 1,200 feet from the perimeter of the airfield and rising to a height of 100 feet.  To the south of the airfield, the terrain dropped some 20 feet.  These two topographical features presented a permanent hazard to arriving and departing aircraft.

Divided into squads of six the training of Air Gunners at 9 Bombing and Gunnery School consisted of a six-week course.  Flying kit was issued along with a white flash to put in the airman’s cap that denoted he was a trainee.  At this time the student airmen were promoted to Leading Aircraftsman (LAC) and were awarded a badge of a propeller to wear on their uniform sleeve.

In addition to their Gunnery training, the students were also expected to carry out other duties to include airfield guard duty. “Make Work” details like cleaning coal and fire buckets were endured as well as physical training and military drill.

Before the trainee Gunners fired their first shot a great deal of ground work had to be undertaken. The trainees received extensive classroom training in aircraft recognition, map reading, mathematics and basic navigation.  In addition, lectures were given on  R.A.F. Law and Administration.

Included in the curriculum were Air Gunner training films, examples of which can be seen at the following site.  “1940 R.A.F. Air Gunners instructional film.”

The students had to be familiar with pyrotechnics and all of the types of armament used with a variety of different weapons systems.

Training huts containing Boulton Paul and Fraser Nash turrets were utilized.  A spot of light was thrown on a curved wall at which the gunner would aim.  Films of various types of attacking aircraft were used with engine noise and gunfire from loudspeakers being utilized to make the exercise as realistic as possible. 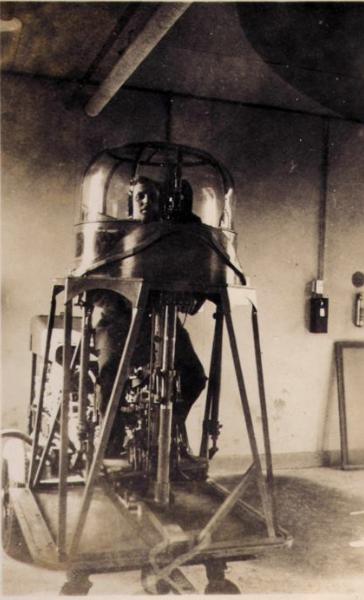 Training apparatus for a Bristol turret.

The trainee gunners were also expected to have knowledge of how to sight those weapons systems.  Hours of blackboard demonstrations were given on how to quarter the sky in search of enemy aircraft.  Demonstrations were given on the “curve of pursuit” or lead and “bullet drop” that must be calculated by the Gunner when aiming at an enemy aircraft.  Exercises using hand-held reflector sights enabled the student to judge the speed of a target aircraft.

Other lessons including learning how to estimate the range and identity of a sighted aircraft.  This was done by projecting an image of an enemy aircraft onto an aerial background.   Then by varying the size of the image, it would be made to correspond to that of a real machine at a given distance.

The importance of the Gunner not to “hosepipe” was stressed.  With an effective range of  300 to 400 yards, a one-second burst on a Browning .303 accounted for ten rounds, conservation of ammunition was of particular importance to an air gunner.

Continual assembly and disassembly of the weapons used by the R.A.F. were practiced at great length.   The students were stressed with being familiar with their weapons mechanisms to a degree that during times of need the Gunners actions would become automatic.

The trainee Gunners were required to strip and reassemble a machine gun down to the last part in two minutes.  This while being timed with a stopwatch, blindfolded, as in a combat situation these tasks would need to be done in the dead of night.

Developed from the American .30 Browning the British Browning .303 was the standard machine gun most usually fitted to British bombers during World War Two.

Manufactured by B.S.A. and Vickers Armstrong the Browning was a reliable and accurate gun with belt fed metal linked cartridges that returned a rate of fire of 1,200 rounds per minute.  In a combat situation, 10,000 rounds of ammunition were stored in four boxes housed within a Frazer Nash turret.

The Vickers G.O. (gas operated) .303 machine gun was developed by Vickers Armstrong for use in aircraft.  This weapon was drum fed and had a rapid rate of fire that was adjustable at between 950 and 1,200 rounds per minute.

A fast rate of fire made it suitable for shooting at attacking aircraft that were traveling at speed.   This fast rate of fire allowed for a great concentration of bullets on a target in a short period of time which also made up for deficiencies in the Gunners marksmanship.

Part of the popularity of the Vickers Machine Gun was due to its great solidity and reliability.  It could be continually fired and would rarely break down or jam.

Included in the course were lectures held in a turret instructional building that contained the nose, tail, upper and ventral turrets as fitted to Bomber Command aircraft.

Here the students learned how to maintain, manipulate and harmonize the 4 guns of the highly maneuverable Fraser Nash, Boulton Paul, and Bristol gun turrets. These fully glazed turrets were operated by either electrical or hydraulic power provided by the aircraft’s engines. Each student was required to have a  working knowledge of each turret fitted to the various aircraft operated by Bomber Command.

The turrets were fitted with cine cameras, which recorded the accuracy of the students shooting and showed whether the gunner was firing high or low in relationship to the target.

Part of the Gunners training would be to visit Hells Mouth Airfield rifle range to familiarize the students with their weapons by live fire exercises.

Also located at Hells Mouth was a moving target range.  Here Wally and his trainee colleagues practiced firing from a portable gun turret at a large plywood model of an aircraft.

This model aircraft was powered by an electric motor that traveled at speed on an oval narrow track railway that ran parallel with the ground trainer turret.  The turret trainer that was powered by an automobile engine had the ability to move backward and forwards as the student fired live rounds at the model.   This exercise was designed to simulate air to air firing.

A Miles Martinet flies over a class of Gunnery Students.

All of the theory learned in the classrooms was put into practice in the air, flying in the Armstrong Whitworth Whitley and the Fairey Battle aircraft which were loaded with pupils and training apparatus.

Frustratingly both for instructors and students the Air Gunners course was often put back due to bad winter weather and mechanical failures of the aircraft that closed flying down, although this was not the case in Wally Layne’s period of training.

Once in the air the student’s aircraft, departing from Penrhos, would make a rendezvous in an allotted firing zone over the Hells Mouth firing range with a target towing aircraft.

These drogue towing aircraft were Hawker Henleys and Fairey Battles that were operated by No. 1 Anti-Aircraft Cooperation Unit

In addition to the drogue, a flag target was utilized.  With dimensions of twelve feet by sixty feet with the leading edge stiffened by a pole, the flag target trailed 3,400 feet behind the towing aircraft.

After the gunnery exercise, the flags were dropped at Hells Mouth airfield.  Here an assessment of the strikes made by the coloured rounds that had been fired by the students was made.

Air to ground gunnery was perfected in the beach that separated Hells Mouth Airfield from the ocean, the students firing on targets located in the dunes or out to sea.

Trainee Gunners inspect a drogue that they had fired on.

The Whitley would take up a squad of six student gunners at a time.  Taking it in turns the student gunners would first fire the fixed forward guns.   They would then clamber into the Whitley’s Fraser Nash rear turret to perform gunnery exercises to further hone their gunnery skills.  Here they would learn the intricacies of Beam Firing, and Free Firing astern under the tail.

Having made up their own belts of ammunition with every fifth round being a tracer, the students lost marks in the result of a stoppage.  Although the Whitley’s turret contained four guns, the students were only allowed to fire one due to the Wartime economy.

A 7% hit ratio was considered successful and was calculated on the number of hits it would take to bring an enemy aircraft down.

The business end of a Whitley, although fitted with four guns gunnery students were only allowed to fire a single gun.

The Fairey Battle would carry aloft two student gunners.  In order to differentiate between the two students, one would fire at the drogue with normal ammunition and the other with ammunition that was coated with wax that was covered with a coloured paint.

Usually between one and two hundred rounds were fired and the hits on the drogue were counted on the ground.  A great deal of dissatisfaction was voiced among the trainees as it was believed that the coloured ammunition did not always leave a mark. 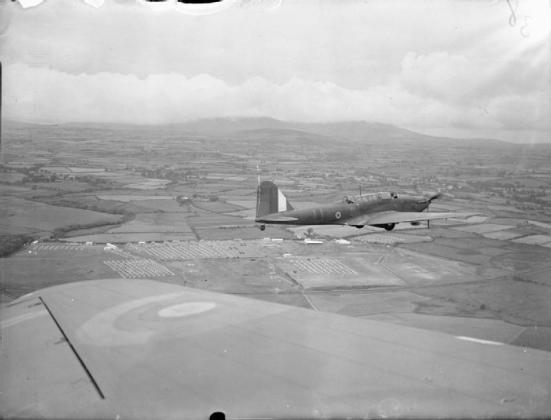 The following is from a Gunnery Course Manual as used by students at a Bombing and Gunnery School.

Search the sky before take off and landing when your aircraft is most venerable.

If gun fire is observed search for fighter and take evasive action.

Patrol across the sun, never into it or away from it.

If using tracer at night, remember it tends to momentarily destroy your night vision; hold your fire if necessary.   The aim of an enemy fighter is to destroy; the aim of a bomber air gunner is to get safely to the target and back to base.

Never fire until fired upon, in the event of gunfire search for fighter and take evasive action.

Always watch your own tail.

Conserve your ammo; if you are fired upon from long-range instruct the pilot to take evasive action.

Never fly straight or dive when under attack; never turn away from an attack, always toward.

Use good teamwork with the rest of the crew.

If on reconnaissance aircraft, your job is to return with information; not to seek combat with enemy aircraft.

All aircraft approaching are considered to be the enemy until identified otherwise.

If your own guns fail or are damaged during an attack use your ingenuity to outwit the attacker.

REMEMBER: TO BE SURPRISED IS TO BE LOST 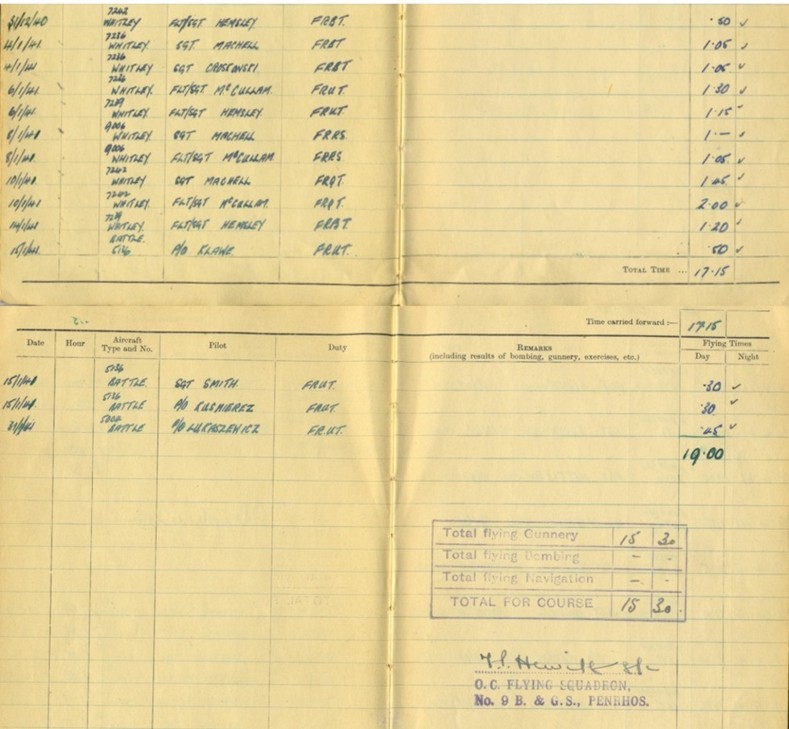 At the conclusion of the ground school and the aerial training, the students underwent an extensive three-day series of exams.  Thoroughly tested on all they had learned in the preceding week’s successful students were promoted to the grade of Sergeant.  The highest scoring student was often recommended for a commission.

In addition to a promotion, Wally Layne and his fellow graduating students were awarded the coveted Air Gunner wings and received their orders for reporting to an Operational Training Unit.